September ’79.Â  School was back in session, and everyone but me had grown a foot taller.Â  I didn’t care. Â I was the only kid in class with tickets to the Dire Straits concert, thee hottest bill in town.Â  I’d gladly sacrifice a foot of height to have Knopfler & Co. melt my face off from the 3rd row, hands down.Â  What’s that you say?Â  You don’t care what I was thinking or feeling or listening to back in junior high 30 years ago?Â  OK, well fuck you, then.Â  Just clickÂ this linkÂ & let the opening chords of today’sÂ 45 RPM platter set you adrift on a sea of memory bliss.

Warming upÂ for the Sultans Of Swing that chilly FallÂ night 3 decades ago was Ian Gomm, the formerÂ Brinsley Schwarz bassist, Nick Lowe cohort, and co-writer of the everlasting power-pop classic “Cruel To Be Kind.”Â  Touring in support of his Summer Holiday LP (from which “Hold On” was pulled, punnily retitled Gomm With The Wind stateside), Gomm brought along an all-star pub-rock who’s-who to flesh out the material, including Andrew Bodnar on bass and Martin Belmont on guitar.Â Â Twenty-four hour service, in-deed! 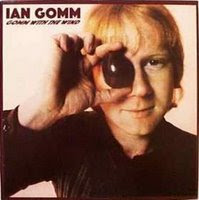 A lush & lovely ballad celebrating out-with-the-old/in-with-the-new mentality (a market once cornered by the likes of Guy Lombardo), B-side “Another Year” would’ve sounded right at homeÂ at the tail-end ofÂ any of Squeeze’s post-East Side Story LPs, as would just about any tracks off the brilliant Summer Holiday.Â  “Hold On”Â climbed toÂ #18 on the US singles charts, and still pops up on AM radio now & then, sounding brilliant as ever.Â  Still active, Gomm’sÂ current whereabouts can easily be tracked via the ever-rhyming Ian Gomm Dot Comm.

NEXT WEEK: The greatest garage-rock single of all time?