Entering our National Park system tonight at DC’s Wolf Trap (if you pay taxes in the US, you’re a part-owner), is a monstrosity of an idea:Â  It Was Forty Years Ago Today.Â  The Beatles tribute concert is on national tour and features Rundgren, Foreigner’s Lou Gramm, Denny Laine, Christopher Cross, and Bo Bice. 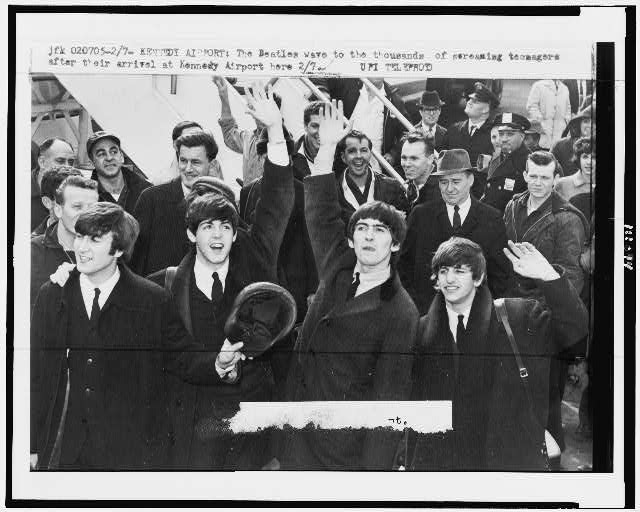 The Beatles landing in New York in 1964

Rundgren is a public Beatlemaniac whose music is often infused with the Fab Four. By infused, I mean influenced by, not ripped off like he was a lost Gallagher brother prepping a new Oasis album.Â  He knew better than to tackle 1967’s (yes, that’s 41 years) Sgt. Pepper.Â  He must have known that mogul Robert Stigwood tried to do the same thing twenty years ago with artists actually on the charts and horribly failed despite Marurice White with EW&F creating the definitive version of Got To Get You Into My Life.

The lineup for this show is a mystery.Â  Where Stigwood’s movie had Frampton, The Bee Gees, EW&F, Aerosmith and Alice Cooper, this year’s model has Bo Friggin’ Bice.Â  I grew tired of listening to Bice cover Vehicle week after torturous week on American Idol.Â  I can’t imagine him singing With A Little Help From My Friends.Â

Still, Bice still has voice.Â  Having seen Lou Gramm just a few years ago, I am reasonably confident in saying the Foreigner front man’s voice is shredded.Â  I caught Denny Lane just months ago at a little coffeehouse gig.Â  The Moody Blues and Wings member has to love profiting off Macca’s songs now because when I saw him, every third sentence was about some great offense Sir Paul had given.Â Â  And it was probably true.

I get why Christopher Cross is there. These songs were sung by world-weary, trippy lads in their mid 20s and then manipulated with whatever Sir George Martin could invent that year.Â Â  Cross is likely the only band member able to take the top harmony line on many of the iconic songs.

This is a bad idea, sounds like a horrible waste of money and keeps Boomers rooted in the past.Â  One of my favorite quotes about music was written by Nick Hornby years ago and seems appropriate:

Your old music cannot sustain you through a life, not if you’re someone who listens to music every day, at every opportunity. You need input, because pop music is about freshness, about Nelly Furtado and the maddeningly memorable fourth track on a first album by a band you saw on a late-night TV show. And no, that fourth track is not as good as anything on Pet Sounds or Blonde on Blonde or What’s Going On, but when was the last time you played Pet Sounds?